From the Disk Brush to the "Contral Brush", a Dr. Gansow Innovation Story

More than half of the production and sales volume of scrubber-driers relates to the small configurations with only one disc brush and up to 21 "Ø brush plates. Their compactness, maneuverability, higher surface coverage and the lower entry price creates a high level of popularity amongst users and often replaces a manual method with equipment such as a scrubber, mop and press in their first investment step.

Use of a twist-free brush system

That's why the Dr. Gansow research approach relates on inventing a "twist" free brush system for sin-gle-disc brush heads. It culminated in the German Patent DBP 195 22. Otherwise the operator continu-ously has to operate against a tiring counter steering, and that leads from time to time to an unpleasant accumulation of collision events with furnishings within buildings. Here it was and is necessary to reme-dy the situation. Cylindrical brush systems were not in the systemic focus of Dr. Gansow: The research focused on an intensive, effective and residue-free cleaning of non-textile floor coverings and not at a wet sweeping analogous to sweeping machines adopted to dry materials.

The approach in the search for twist-free alternative solutions for the common disc brushes was and is the decoupling on two mechanically superimposed and opposing planes.

The first and highest level is a smooth upper brush plate with central bayonet coupling for horizontal and vertical guidance and power transmission. On the side facing the ground surface, small sub-brushes are arranged so that they are rotatable guided vertically and laterally backlash-free as well as in contrasting manner via ball-bearing vertical plug-in axes with vertical clip couplings.

The slight inclination (just 3°) of the plug-in axles towards the center, describing the coat of a cone, the dragged, friction-induced contra-rotation to the upper "master plate" of the smaller numerous sub-brushes, determine the so called "Contral Effect" (lateral contra rotation leads to the trademark "Contral"):

The cleaning power/energy of a tool, i.e. a brush or pad, is physically determined and effected by contact pressure and rotational speed, where the relevant formula of the kinetic energy is as follows: Ek = ½ m Δv² (Ek = kinetic energy, m = mass / pressure, Δv = speed change)

Here, the double effect of the research result of the “Contral Brush” plates becomes immediately apparent: 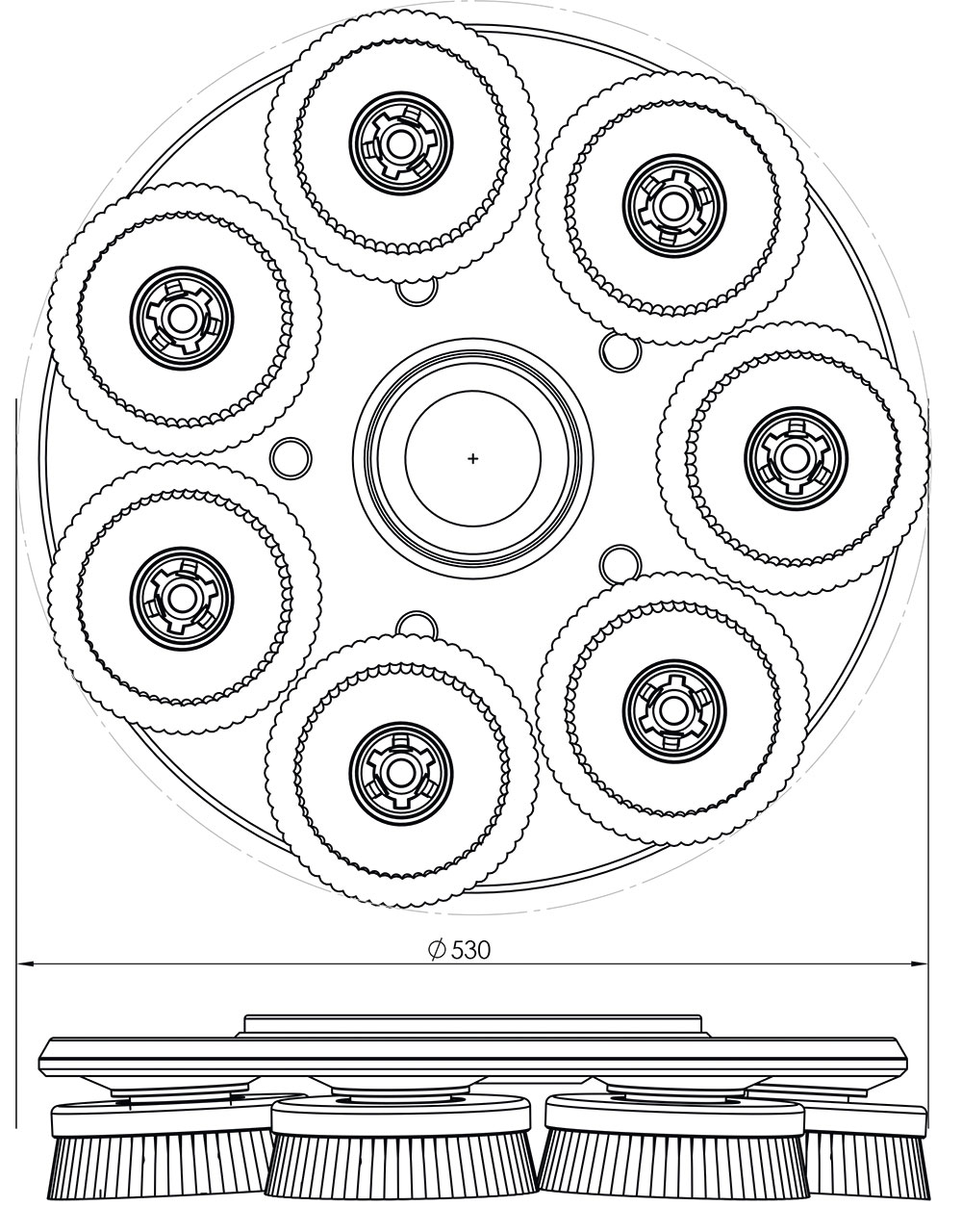 For a master plate of 21" or about 533mm diameter, the lower seven sub-brushes have a diameter of only 6" or about 150mm. The ratio of the effective radii is slightly lower, because the stub axles move a little from the edge of the master plate inward to ensure a solid composite of the mounting system of the plug-in axles of double helical bearings made of stainless steel in the edge region of the master plate. 6" is a standard diameter for pad systems, all of which are manufactured in the same way as tube sizes. The reason for this lies in the market introduction of the American 3M conglomerate followed by the company Glitt, also USA-derived.

The smallest hand-held scrubber drier in the Gmatic® family with a chassis width of only 45cm. The overhang of the brush head on the left and right is 5cm or 15cm for scrubbing under overhangs. The battery life is approximately 2:20 hours.

The walk-behind scrubber drier from the Gmatic® family. Up to 7,100m² per battery charge and 980m² per tank filling. The battery life adds up to 2:50 hours with a charging time of 4.5 hours.

The most versatile walk-behind scrubber drier in the Gmatic® family. The working width varies between 73 and 85cm. The battery life in the version with 170Ah adds up to 3:20 hours. With dimensions of 147x60x106cm maximum performance in a confined space.
Read More

The endurance runner among the walk-behind scrubber driers of the Gmatic® family. The battery life is 5:00 hours with a charging time of 4.5 hours. This model is ideal for continuous use and 2-shift operation in bakeries and industrial kitchens.
Read More

The largest walk-behind scrubber drier in the Gmatic® family. Up to 20,200 m² per battery charge and 1,920 m² per tank filling. The battery life adds up to 6:00 hours with a charging time of 4.5 hours. The alternative to the small rider in the shopping center and large warehouse.

The smallest ride-on scrubber drier in the Rotan ™ family.

tank filling. The battery life adds up to approx. 5:40 hours with

a charging time of 4.5 hours. The alternative for large

walk-behind models in the shopping center

The medium ride-on scrubber drier of the Rotan ™ family.

tank filling. The battery adds up to approx. 6:40 hours with

The largest ride-on scrubber drier in the Rotan ™ family.

tank filling. The battery life adds up to approx. 6:00 hours with

Do you have questions about our products or do you need help? We will be happy to assist you.